“Push-to-Talk”, PTT, decribes telephony over radio networks in which users press a key to activate the voice transmission path before speaking.  PTT is characterised by rapid call setup with few user operations, and the possibility of making ‘one-to-one’ and ‘one-to-many’ (group) calls.  Current standards for radio communication include TETRA and Project 25, also known as P25 and APCO-25.  These standards have been designed to meet the communications requirements of the public safety services, and provide both speech and data transmission.  TETRA and Project 25 are examples of PMR – Private (Professional) Radio.

Push-to-Talk over Cellular, PoC, is an overlay on some 2.5G, 3G and 4G cellular networks which mimics the behaviour of conventional PTT networks.  Advantages for users include (i) the ability to make PTT and regular cellular calls via the same handset and (ii) superior radio coverage, particularly in public buildings such as shopping malls, airports and hospitals.  PoC is available as a native feature of some cellular networks (mostly in North and South America) and is also available as an over-the-top service via handset apps.

PTT services are traditionally simplex, that is only one person can speak and be heard at any one time.  The person speaking is said to hold the ‘floor’.  However, full-duplex communications are supported by some technologies, allowing users to converse freely, just as they would when making normal PSTN and cellular calls.

When it comes to testing the voice quality of PTT services, it is highly desirable to automate the process, since the requirement to operate PTT buttons continuously soon becomes tedious and time-consuming.

Two-way radio terminals (hand-held and for installation in vehicles) made by manufacturers including Motorola, Sepura and Cassidian, feature proprietary interfaces which support a range of accessories; these interfaces may be used to connect the terminals to a test system, but specific cables are required for the purpose.  There are numerous manufacturers of dispatcher consoles for two-way radio networks – these typically allow public safety officers to receive calls from the public and others, and to make calls via radio to field personnel.  Consoles feature (usually proprietary) interfaces to which a headset with a boom microphone is normally attached.  A suitably-designed test system cable transfers microphone, headphone and PTT signals to a test system, whilst blocking the relatively high voltages which are sometimes present at these interfaces.

PoC services offered by smartphones can be tested via the 4-pole headset jack, although the arrangement for automating the PTT button varies from product to product and from app to app.  A typical solution is to use the Volume Up or Volume Down button on the smartphone or headset – in this case a suitably-designed cable will allow the voice quality test system to operate the PTT automatically.

Voice quality is the most frequently-sought measurement for PTT services, but there are, in fact, various performance factors which may impact the quality of service that users experience.   Regardless of users’ expectations, all of the measurements listed below are relevant for developers, testers, integrators and network operators:

·       Voice quality score – an assessment of listening quality as perceived by the user.

·       Latency/voice delay – this can be significantly higher than for conventional telephony, due to encryption/decryption processes. High latency is less troublesome in the simplex mode, but tends to inhibit natural conversation flow in the full-duplex mode.

·       PTT-to-tone delay (call setup time) – the time between the initial PTT operation and the ‘floor’ becoming available (speech path open). Taking the floor is usually marked by a tone of short duration.

·       PTT-to-alert delay – the time between the initial PTT operation and the delivery of an alerting tone to the recipient(s).

·       Release-to-tone delay – the time between the release of the PTT button and the tone confirming that the floor has been released.

Malden’s MultiDSLA voice quality test system has the flexibility to meet the test requirements outlined above.  Malden offers an economical design and build service for the special test cables required for testing all types of PTT equipment and services.  The flexible test design features in MultiDSLA mean that it is easy to create or modify tests which recognise specific tones generated in PTT terminals and devices, and measure the tone timings.  MultiDSLA’s hardware features programmable switches which automate PTT operations in conjunction with the test cables.  The test sequence combines PTT operations, tone delay measurements (if required), multi-speaker voice quality assessment and voice latency/delay.  The test process can operate as a single-shot, returning a few measurements, or as a repeating or continuous test, with statistical and trend reporting.

The tasklist below shows a typical test suite which accomplishes all the measurements mentioned above; the subsequent screen shots show examples of results presentation. 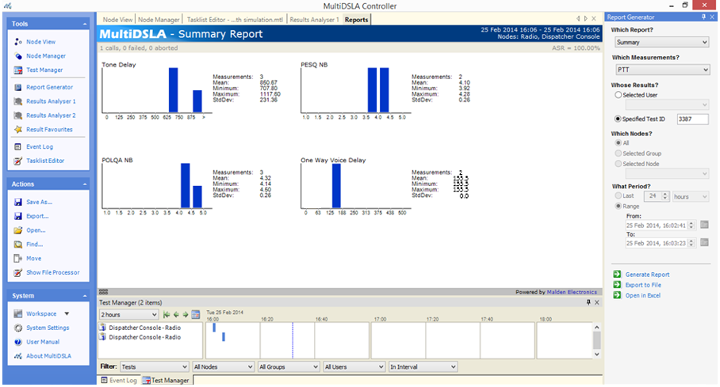 Selected indicators in the Summary Report, available in the MultiDSLA Controller application and via web browser 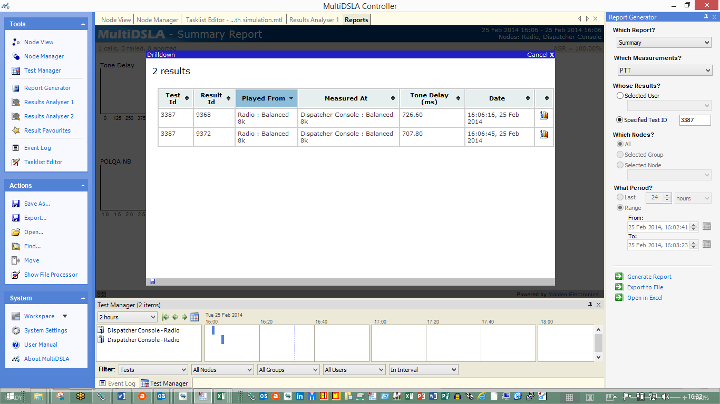 Drill-down from the Summary Report to individual tone delay results 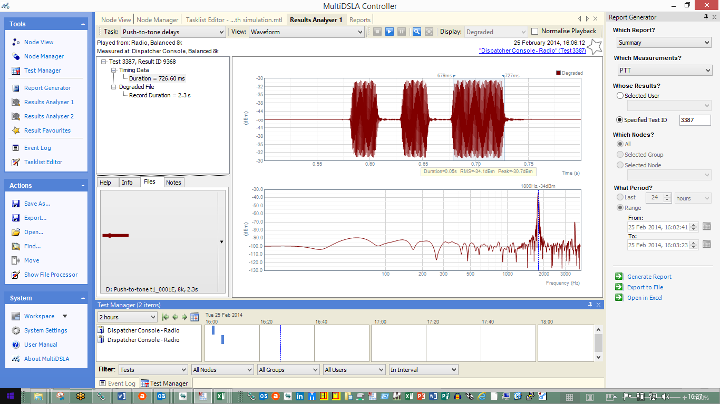