The test can be run from a single PC.

The diagram below shows the configuration of the test.

The two mobile phones involved in the test are in a call. The device on the left has Bluetooth enabled, and is the device under test. The device on the right has no Bluetooth; it is not the object of the test but it does influence the measurements. The alternative configuration described below, using a base station emulator, avoids this.

The PC connected to the Bluetooth-enabled ‘phone controls the BlueSoleil™ Bluetooth and allows Bluetooth to be switched on and off during the tests.

The script does not have to run on the same PC as MultiDSLA; it could be anywhere on the network.

Case 2: Test Involves a Mobile Phone with Bluetooth and a Base Station Emulator

It is possible to substitute the second mobile phone for a base station emulator, an analogue telephone, or any type of desk telephone.

The figure below shows a base station emulator substituted for the second mobile phone.

BLUETOOTH TEST CONFIGURATION FOR PHONE AND BASE STATION EMULATOR

The brand of the base station emulator is immaterial to the test; however, the emulator must have external audio connectors suitable for interfacing to DSLAII.

The diagram below is a schematic of the test scenario. 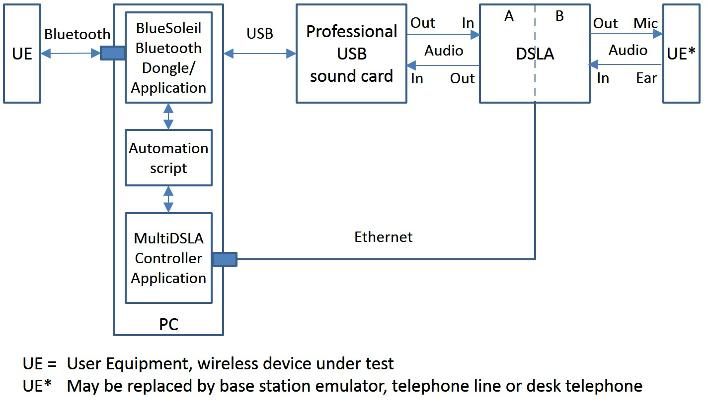